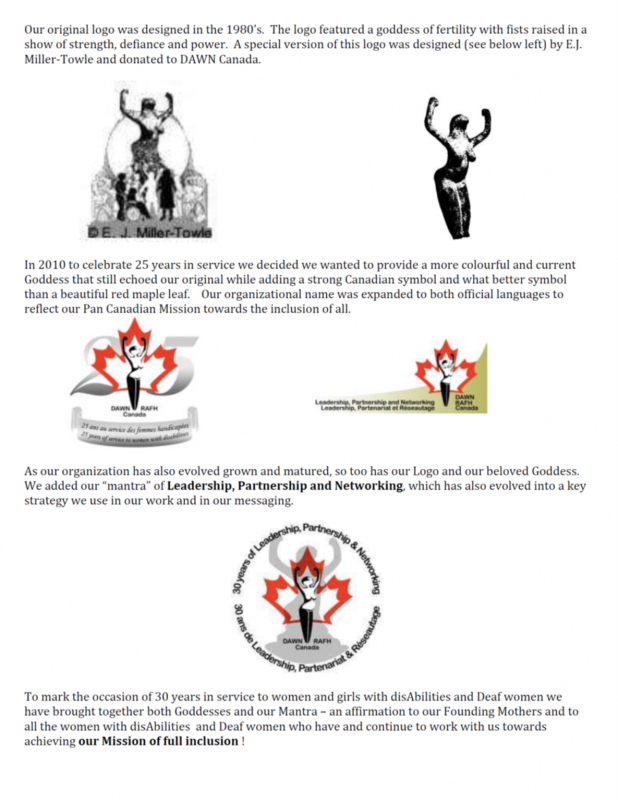 The earlier work of the DAWN Canada women was largely focused on establishing local and provincial support groups and developing resources.  The quantity and quality of publications and resources published and in some cases translated into several languages remains impressive.

In May 2007, with a firm commitment to operating as a Pan Canadian organization, we established a national head office at the Maison Parent Roback, a feminist collective in Montreal, and made an official name change to DAWN-RAFH Canada to reflect our name in both official languages.  We remain the only national feminist disability organization in the country and one of only a handful in the world.

Under the leadership of our President Carmela Hutchison and our Board, and with the energy and vision of our National Executive Director Bonnie Brayton, and Staff, all of whom are women with disabilities, DAWN-RAFH Canada continues to represent the voices of women with disabilities and Deaf women, both nationally and internationally.

Just over a week ago we attended the eighth Conference of States Parties on the Convention on the Rights of People with Disabilities (CRPD) at the United Nations where our IN FOCUS initiative was named as one of ten Global Good Practices in addressing violence by Handicap International.  It is clear from the outcomes that women with disabilities have got the responses at the ready  the real challenge is engaging leadership in our home countries to actually get behind us and the many organizations who are charged with actually providing prevention and response services.

In the year ahead we will be working with our own National Advisory Committee on Violence Against Women with DisAbilities and Deaf women, and the hundreds of network  Partners we have connected with through the Blueprint for Canadas National Action Plan on Violence Against Women and Girls.  We are committed to ensuring that our Federal, Provincial/Territorial and Municipal Governments honour the legislation and human rights treaties which are supposed to be protecting all women in Canada but have, until now failed miserably in this regard.  Women in Canada today are NOT equal. Indigenous, LGBTQ, racialized, immigrant and refugee women and girls in Canada are NOT thriving!

According to the World Health Organization, there are over one billion people with disabilities in the world, more than half of whom are women, making us the largest minority group on the planet and here in Canada.  We continue to live with the highest rates of violence and the lowest rates of employment.  This is not a policy gap  this is a policy abyss!

As we proudly enter our third decade, we are launching a national call to action to the leadership of our country to work with us to address the alarming rates[2] of violence that women with disabilities and Deaf women experience.  The disconnection between legislation, policy and service delivery can and must be addressed.

DAWN-RAFH Canada will continue to develop tools, resources and curriculum to advance inclusive practice, to lead research, to inform policy and to raise issues that affect women with disabilities and Deaf women in Canada and around the world.

DisAbled Womens Network (DAWN-RAFH) Canada is a national, feminist, cross-disability organization whose mission is to end the poverty, isolation, discrimination and violence experienced by Canadian women with disabilities and Deaf women.