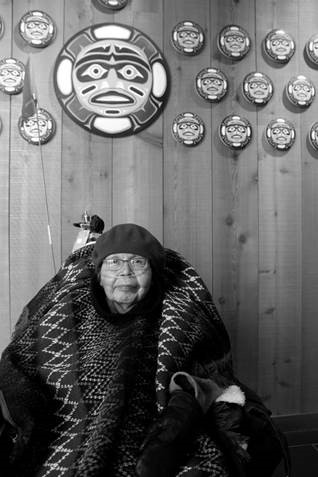 Sister Judi Johnny of the Gwa’Sala Nakwaxda’Xw First Nation. Judi was from the Port Alberni region and was born on November 2nd, 1949. Her great spirit left her body on February 4, 2015 at 9 pm in Whitehorse, in the company of a friend. She was a lifelong advocate for the rights of women with disabilities in her community.

Judi Johnny founded the feminist disability collective Women On Wings in 1991 in Yukon after she was inspired by attending a National meeting of DAWN Canada. In 1992, she joined DAWN Canada’s board of directors.

Judi rejoined the DAWN Canada’s board of directors in 2010. According to DAWN’s National Executive Director, Bonnie Brayton: “She just called me up one day and told me who she was and asked if there was a position open on the board! Judi was a very ‘to the point’ kind of woman and simply said she wanted me to work with her to finish what she had started back in 1991.”

The Yukon Women’s Directorate conducted a series of short interviews with Judi Johnny before she passed away in 2015. On their website, they describe Judi as “a First Nations woman, fierce advocate for people with disabilities, and beloved member of the Whitehorse community.”

Listen to her interviews here:

HERstory is a retrospective on DAWN Canada’s feminist disability activism
In 1985, seventeen women from across Canada met to discuss disability rights issues from women's perspectives. From that meeting, DAWN Canada was founded. In the 35 years that followed, DAWN Canada engaged in activist work that later became the foundation for our four-pillar approach: research, education, policy, and advocacy. To mark our 35th year in service and in hope, we will be highlighting six moments in DAWN Canada’s history including publications from our archives, landmark Supreme Court cases in which we participated, and other pieces of our story. We will also be interviewing six women connected to DAWN Canada's history and sharing their stories and reflections. Click here to read all the posts in the HERstory project.